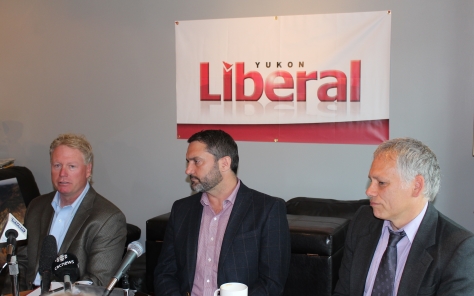 WHITEHORSE – John Streicker and Rod Taylor announced today they are joining the Yukon Liberal Party and will put their names forward to run in the next territorial election. Liberal Leader Sandy Silver introduced the pair at a news conference today.

“I’m very pleased to welcome both John and Rod as members of the Yukon Liberal Party and as potential candidates in the upcoming election,” said Silver.  “They are both well-known leaders who have made great contributions to our community.”

Streicker, whose term on Whitehorse City Council ends in October, said he believes Silver is the leader who best demonstrates positive politics, and who is working to improve the Legislature for all Yukoners.

“Sandy’s focus is on making decisions that benefit all Yukoners," he said. "He is truly interested in working with everyone, not just those who agree with him. He brings people together instead of trying to divide Yukoners into us vs. them camps.”

Taylor said he is impressed with Silver’s ability to work collaboratively with other people and other levels of government.

“Sandy truly believes that the role of politicians is to lose the partisanship and dwell instead on doing what is best for the majority of Yukoners – regardless of whether they voted for you or not,” he said. “This is the democratic reform I stand for and continue to believe is possible for the Yukon and I believe that Sandy and the Liberal Party are the best chance we have to realize this vision.”

The party will begin holding nomination meetings, and host a policy convention, this fall.

"As a party we are getting ready for an election that could happen any time in the next sixteen months," Silver said.  "With John and Rod on board Yukoners have a better idea of what the Liberal Party is all about, a party that is focused on solutions that benefit everyone, not just one side or the other."

The next Yukon general election must be called by the fall of 2016.